Editors Note: Yasuhiro is not a native English speaker, so during the editing of this post is was necessary to make some minor corrections. We felt that it was very important however, that the Author’s original phrasing and intent be preserved as much as possible.

As you already know, Go is a good programming language to write web applications.

There are already many packages providing routers, MVC, and Sinatra-like frameworks. However, Go is also a good programming language to write command-line applications. I have written many small programs written in Go, and I believe Go is the best for this task.

Most of Go’s packages are beautiful for beginners to see, because Go hides the operating system’s peculiar matters as much as possible. For example: file system differences, character encodings, socket I/O, concurrency. You’ll notice this is a feature of Go.

For example, path/filepath provides a way to manipulate file paths in an OS independent manner. This code will work fine for both POSIX Operating Systems and Windows.

path/filepath treats file paths as simple UTF-8 strings. All of the APIs for file systems are doing the proper encoding/decoding for their environment. os.Args is encoded to UTF-8 even though it’s on Windows. So Windows user can write programs without entering the hell of multi-byte encoding. 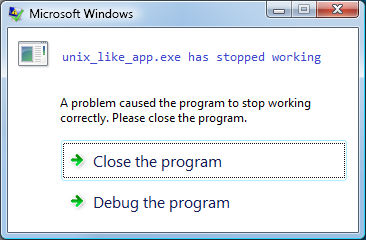 but Go can make them happy.

I speculate that Go will provide a new style of UI coding.

Traditionally it is difficult to handle both key-press events and input timeouts at once. However, if you separate key event handling into a goroutine and pass events to a channel external to the goroutine, it may make complex UI coding simpler.

If you create a channel for the events, you will be able to handle other events in the select easily.

When typing keys, in most cases, internal conditions will be changed and the UI will need to be redrawn. But the rendering may be expensive to call for each of key press,and we do not want to block other operations. A solution is to use a goroutine and a timer.

The timer makes a delay for redrawing screen. If the next event requires forcing a screen update, our redraw goroutine will be run immediately.

Of course, the above code works fine for Windows. You don’t need to do things the hard way. Writing pthread codes? Writing multiple event polling? No. Do it the easy way by using Go.

But… I must write OS Specific Code

For example, you want to eject the CD-ROM tray in Go. Then you can use go-eject.

As you can see, Go can separate operating system specific code using a file naming convention.

Another way to separate specific OS code is to add magic into the top of the file.

This mean “Build this code unless compiling for Windows”.

Go provides an easy way to write bindings. If you already have C code, and you want to use it, you can use CGO. For example, eject_linux.go uses CGO.

If you don’t want to mix C code in Go code, you can also separate C code to another file. The Go tool will build it perfectly.

For Windows, you can call functions in DLLs dynamically.

Note that you’re better off using the wide string APIs on Windows.

As I mentioned before, Go is a very nice language for Windows programmers. If you write a package wrapping OS specific issue in one place, most of users doesn’t need to worry about compatibility. i.e. many users can eject CD-ROM with by using eject.Eject(), regardless of their operating system.

Finally, you can write a full application using go-eject and web.go to eject your cd from the Web.