Creating Your Own Bot Experience with go-sarah

Chat tools have been good friends of developers. On chat tools we share our thoughts, problems, solutions, jokes, and pretty much everything we do as software engineers. And when some kind of tasks can be done in the extension of daily chat conversation, chat becomes even more comfortable yet powerful place to stay. That is why I think many developers eager to customize their chat experience with bot frameworks. In this article I am going to introduce a new golang-based bot framework, go-sarah, along with its notable characteristics and components.

As previously stated, we prefer to execute tasks in the extension of chat-based conversation. To maximize that user experience, go-sarah has an idea of “conversational context,” which stores current user state and defines what action to follow.

Think about when, like any other day on chat tool, you are talking with your colleagues about a critical issue reported by a user. Everybody agrees this must be fixed before Christmas holidays. In the extension of this conversation, on chat tool, you type in something like “.todo Fix Sarah’s issue #123 by 2017-12-20 12:00:00” to register schedule. This is somewhat handy, but user still has to input command and its arguments at once. There is some room to improve. With go-sarah’s “conversational context” feature, you can stash currently provided arguments and still prompt user to provide unfilled argument one at a time just like the image below: 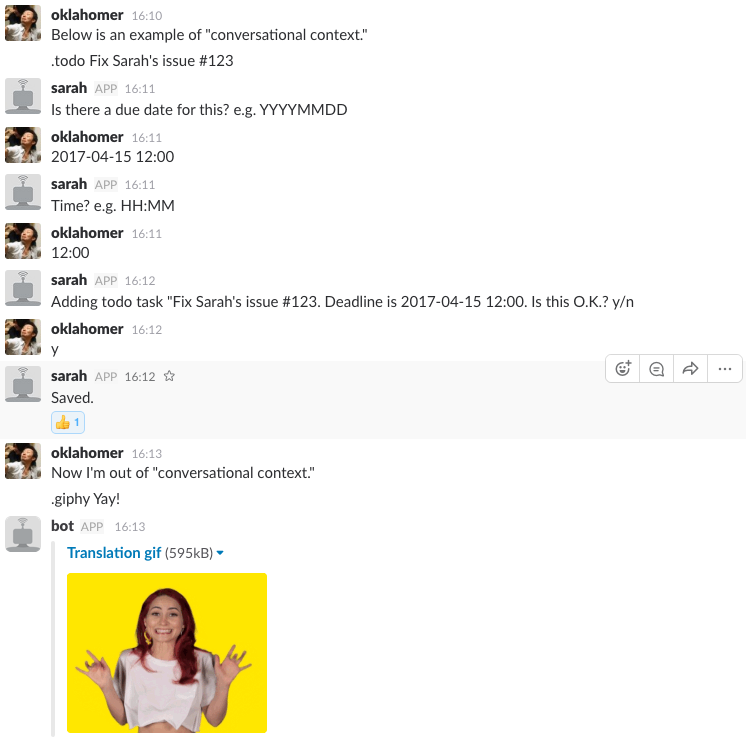 This is more “conversational” and user friendly. With this feature, not only can the bot let the user input arguments step by step, the bot can also validate partial user input and prompt user to re-input. This can also be used in a way such as user and AI have conversation during when user inputs “.ai” command until user inputs something like “quit.”

Let’s say you have a command that receives user input such as “.weather San Antonio, Texas” and respond local weather. A problem is that this command internally calls a third party web api with expirable token, and the token must be manually updated every once in a while. Do you update configuration file and reboot bot process?

With proper settings, go-sarah reads a configuration file when that file is updated and applies changes to corresponding command’s configuration struct in a thread safe manner. So the bot process does not need to be rebooted just to update configuration value. Details will be covered later on this post.

There are two kinds of executable jobs in this project: command and scheduled task.

Command is a job that is matched against user input and, if matched, executed. For example, bot says “Hello, {user name}” when user input “.hello” on chat window. This is pretty basic.

Scheduled task is the one executed in a scheduled manner without any user input. Output is sent to a predefined destination or the output itself can designate its destination chat room. Examples can be a task that sends daily weather forecast to predefined room on every morning, and a task that sends statistical data to every project room defined in a configuration struct. Thanks to the live configuration update feature, the schedule or task-specific configuration values can be updated without process reboot.

Developers can register as many sarah.Alerter implementations as wanted to notify bot’s critical states to administrators.

Instead of trying to meet all developers’ needs, this bot framework is composed of fine grained replaceable components. Each component has its interface and at least one default implementation. If one wishes to modify bot’s behavior, one may implement corresponding interface and replace default implementation. They each are designed to have one and only one domain to serve, so customization should require minimum effort. More details will be covered in next section. 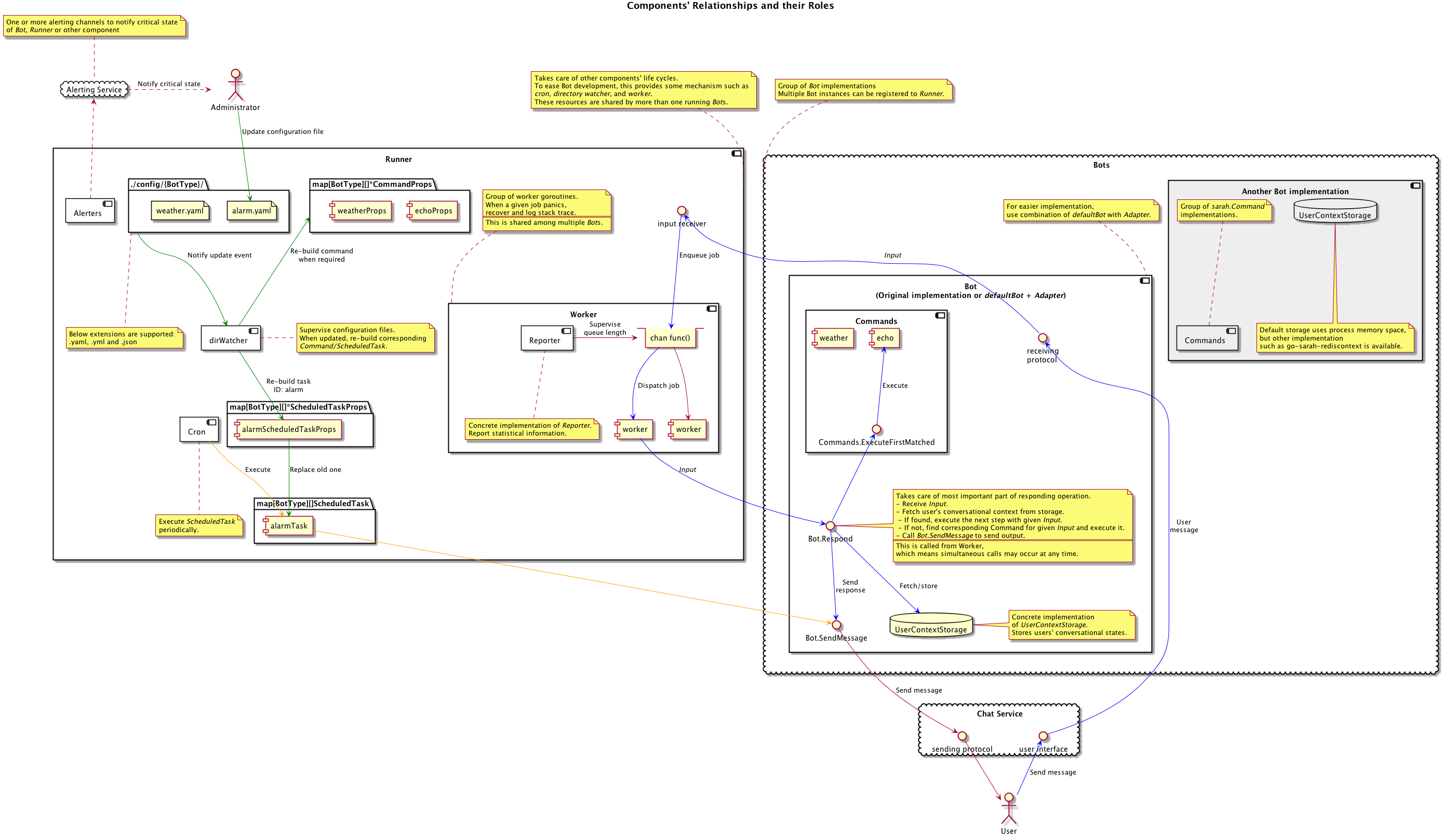 As you can see, the Runner is orchestrating other components and letting them work together. Runner internally has its own panic-proof worker mechanism and jobs are executed in a concurrent manner by default. Even command execution job against given user input is passed to this worker so adapter developers never have to worry about implementing own mechanism to handle flooding incoming messages.

Sometimes, this becomes cumbersome to initialize all components and pass to sarah.NewRunner() at once. Then sarah.RunnerOptions comes in handy. This can be used to stash options as you code like below. In this way you will never forget to pass customized component to sarah.Runner.

sarah.Bot interface is responsible for actual interaction with chat services such as LINE, Slack, gitter, etc… Or if two or more parties are messaging each other over pre-defined protocol and executing corresponding Command, such a system can be created by providing one Bot for each party just like go-sarah-iot does to support communication between IoT devices and a central server.

Since sarah.Bot is merely an interface, anything that implements sarah.Bot can be passed to sarah.Runner. To ease its implementation, however, common bot behaviors are already implemented by sarah.defaultBot and can be initialized as sarah.Bot by supplying sarah.Adapter to sarah.NewBot. In this way developers only have to implement chat-tool specific messaging part. It looks somewhat like below:

We already covered what command is. As a matter of fact anything that implements sarah.Command can be a Command and be passed to sarah.Bot.

But to have richer yet simple sarah.Command building experience, sarah.CommandPropsBuilder is provided. This builder is so powerful that few lines of codes can create variety of sarah.Command with totally different behaviors.

To have the simplest form of sarah.Command, it goes as below:

Sometimes you wish to match against user input in a more complex way. Then use MatchFunc instead of MatchPattern like this.

Another one stores serialized arguments and function identifier along with user key in an external storage such as Redis. When user input for the next time, stored context information is fetched from storage, deserialized, and then executed.

The first one is handy because you can simply pass function that satisfies func(context.Context, Input) (*CommandResponse, error) interface, but the one with external storage is more reliable and can be used on multiple processes. There are so many available usages so take a look at project wiki for detail.

With introduced major components, many different bot experience can be achieved. To start with, runnable example code is located at example codes.

Documents are being covered in project top page and wiki pages, but not completed yet. To improve that, I would appreciate your feedbacks: github star, issue, pull request, tweet, or whatever. I named this project after my new born daughter and I am so into it, so any feedback would encourage me. Thanks.