Ever wondered how are your goroutines being scheduled by the go runtime? Ever tried to understand why adding concurrency to your program has not given it better performance? The go execution tracer can help answer these and other questions to help you diagnose performance issues, e.g, latency, contention and poor parallelization.

The tool is available since go 1.5 and works by instrumenting the go runtime for specific events, such as:

All this data is collected by the tracer without any kind of aggregation or sampling. In some busy applications this may result in a large file that can be analyzed afterwards by the go tool trace command.

Go already had the pprof memory and CPU profiler, before the introduction of the execution tracer, so why was it added to the official toolchain? While the CPU profiler does a nice job to telling you what function is spending most CPU time, it does not help you figure out what is preventing a goroutine from running or how are the goroutines being scheduled on the available OS threads. That’s precisely where the tracer really shines. The tracer design doc does a pretty good job explaining the motivations behind the tracer and how it was designed to work.

A tour of Trace

This example creates an unbuffered channel and initializes a goroutine that will send the number 42 over this channel. The main goroutine blocks until the other goroutines send a value over the channel.

Running this code with go run main.go 2> trace.out sends the tracing output to the file trace.out, which can then be read with: go tool trace trace.out.

Before go 1.8, one needed both the executable binary and the trace data to be able to analyze the trace; for programs compiled with go 1.8 onwards, the trace data contains all the information needed by the go tool trace command.

After running the command, a browser window opens with some options. Each of those opens a different view of the tracer, containing different information about the program’s execution. 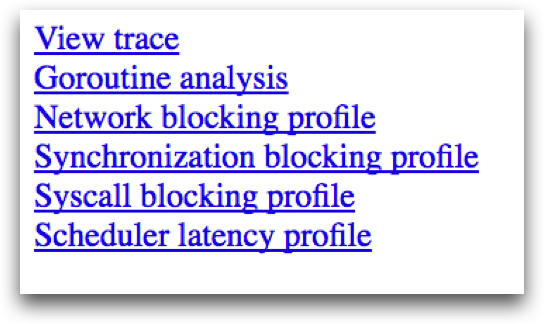 Clicking on the “View trace” linking, one is presented with a screen full of information about the whole program execution.

Press “?” to get a list of available shortcuts to help navigating the trace.

The following image highlights the most important parts and each section is described below:

The image below shows information obtained when selecting a particular goroutine.

We can see that this goroutine created two events: the tracer goroutine and the goroutine that started to send the number 42 on the channel.

By clicking on a particular event (a line in the graph or by selecting the event after clicking on the goroutine), we can see:

One may click on these goroutines to navigate to their trace data.

The image below shows the “Synchronization blocking profile” for our sample code.

This shows us that our main goroutine spent 12.08 microseconds blocked receiving from a channel. This kind of graph is a great way to find lock contentions, when too many goroutines are competing to obtain a lock on a resource.

There are three ways to collect tracing information:

This involved calling trace.Start and trace.Stop and was covered in our “Hello, Tracing” example.

This is useful to collect trace information about code being tested and the test itself.

This is the best method to collect tracing from a running web application.

To be able to collect traces from a running web application written in go, one needs to add the /debug/pprof/trace handler. The following code sample shows how this can be done for the http.DefaultServerMux: by simply importing the net/http/pprof package.

To collect the traces we need to issue a request to the endpoint, e.g, curl localhost:8181/debug/pprof/trace?seconds=10 > trace.out. This request will block for 10 seconds and the trace data will written to the file trace.out. A trace generated like this can be viewed the same way as we did before: go tool trace trace.out.

Security note: beware that exposing pprof handlers to the Internet is not advisable. The recommendation is to expose these endpoints on a different http.Server that is only bound to the loopback interface. This blog post discusses the risks and has code samples on how to properly expose pprof handlers.

Before gathering the trace, let’s start by generating some load on our service using wrk:

This will use 100 connections across 10 threads to make requests during 60 seconds. While wrk is running, we can collect 5s of trace data using curl localhost:8181/debug/pprof/trace?seconds=5 > trace.out. This generated a 5MB file (this can quickly grow if we are able to generate more load) on my 4 CPU machine.

Once again, opening the trace is done by the go tool trace command: go tool trace trace.out. As the tool parses the entire content of the file, this will take longer than our previous example. When it completes, the page looks slightly different:

To guarantee that the browser will be able to render everything, the tool has divided the trace into two continuous parts. Busier applications or longer traces may require the tool to split this in even more parts.

This particular screenshot shows a GC run that starts at between 1169ms and 1170ms and ends right after 1174ms. During this time, an OS thread (PROC 1) ran a goroutine dedicated to the GC while other goroutines assisted in some GC phases (these are displayed on lines bellow the goroutine and are read MARK ASSIST). By the end of the screenshot, we can see that most of the allocated memory was freed by the GC.

Another particular useful information is the number of goroutines that are in “Runnable” state (13 on the selected time): if this number becomes large over time this can indicate that we need more CPUs to handle the load.

The tracer is a powerful tool for debugging concurrency issues, e.g, contentions and logical races. But it does not solve all problems: it is not the best tool available to track down what piece of code is spending most CPU time or allocations. The go tool pprof is better suited for these use cases.

The tool really shines when you want to understand the behavior of a program over time and to know what each goroutine is doing when NOT running. Collecting traces may have some overhead and can generate a high amount of data to be inspected.

André is a Sr. Software Engineer at Globo.com, working on Tsuru. @andresantostc on twitter, https://andrestc.com on the web