Building a CI/CD Bot with Slack and Kubernetes.

This article is about an experiment at Africa’s Talking on using Slack to manage our deployment process.

At Africa’s Talking, each project is written with comprehensive unit testing, also, before a change is approved, several people have to take a look at it and do some manual testing themselves. We’ll refer to these people as the QA team.

After the change is approved, the project can only be deployed to production by a few people. We’ll call these people the project owners.

The way our deployment process used to work was this:

This project is meant to help improve the flow and make it this: 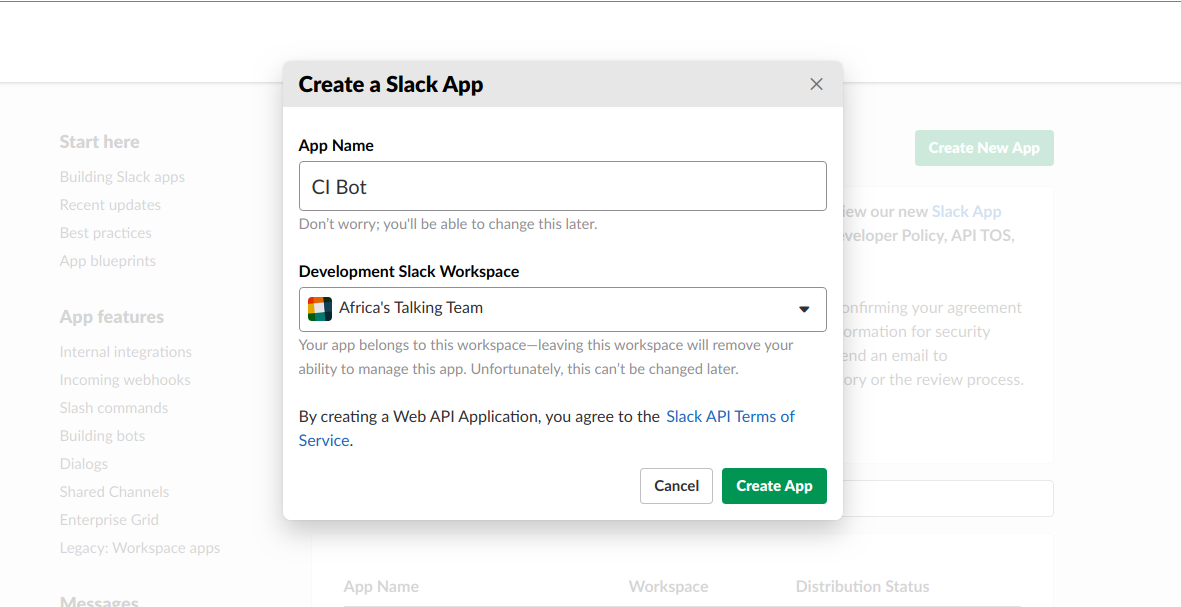 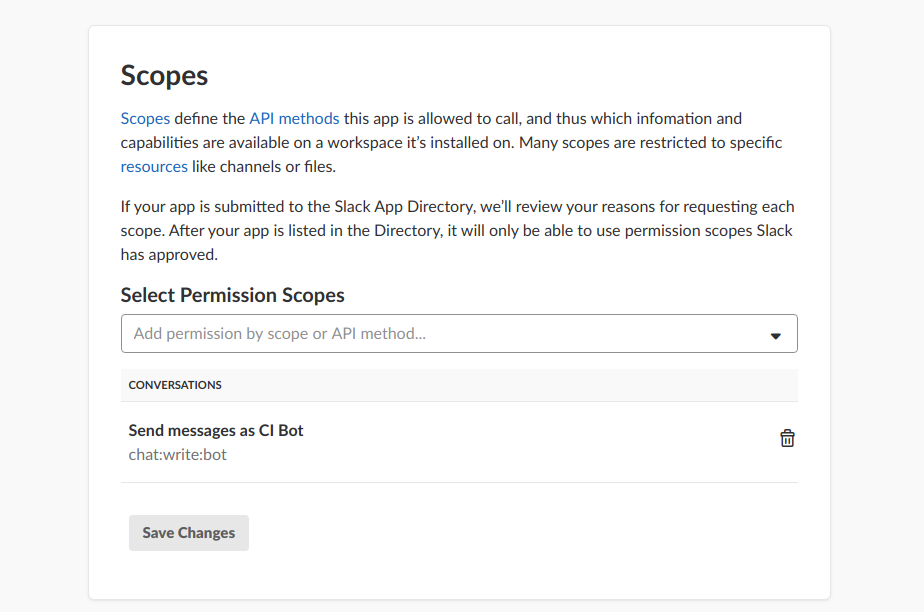 Let us describe the Slack objects in Go. We will create structs for the slack message object, and what we receive from Slack when an interaction happens. To send out our messages, we need to use the token we got after we installed our application to our Slack workspace.

In this example, I’m using Viper to load slackToken from the config. Later during the init() function, we’ll set up Viper so we load the config from the right place.

I like to create a server struct to hold all the dependencies. It is an idea I borrowed from here.

Here is what my server struct for this will look like.

The methods we’ve called in load() will all be located elsewhere. We’ll see those in the following sections.

Now we can write our main.go.

Here, we asked viper to load the config from config.yml in the same directory, but in practice, the config could be loaded from a different place. Take a look at viper’s documentation if you’d like to modify that.

We can define this in our Go code like this. We will also define the addProjects() method of our server.

The addProjects() method expects a projects key in the config.yml which would look something like this:

To avoid vendor lock-in, we decided not to use the native webhooks of any platform. Instead, we will add a final step to our CI service. This step will be to make a POST request to our Bot with these parameters:

On our bot, we can listen for that at /build-complete. The request will be something like this

In our code, we can represent each build with a struct like this:

To deploy we’re going to make use of Kubernetes. Thankfully, there is an amazing Go client to help us interact with our cluster.

We’re going to write a couple of functions that take a Build struct and does the deployment. One of them will be to deploy to auto-generated URLs, the other to deploy to production.

In this case, I am using Ambassador for routing. It is assumed that Ambassador is already set up on the cluster, so I will only need to add a service with the proper annotations to set up my routing to the deployment.

Here are the functions:

NOTE: Viper expects to find “KubeConfigPath” in the config.yml file.

Now let’s define our handlers. We’ll also create a use() method to load handlers by name or return an error if the handler is not registered.

Now we can add our routes. I’ve used the Chi Router here, but anything that implements the http.Handler interface will work too.

The processors would read from the streams and act on them. We need 2 processors:

We’ll begin by invoking processors in goroutines like this:

When a build comes in, what we want to achieve is this: 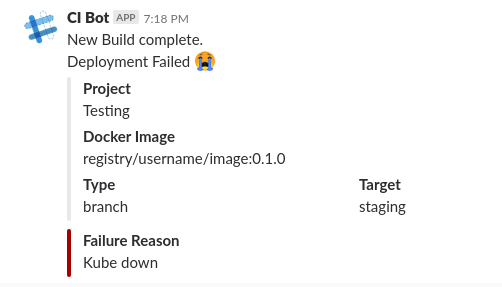 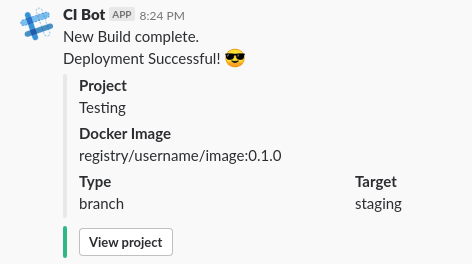 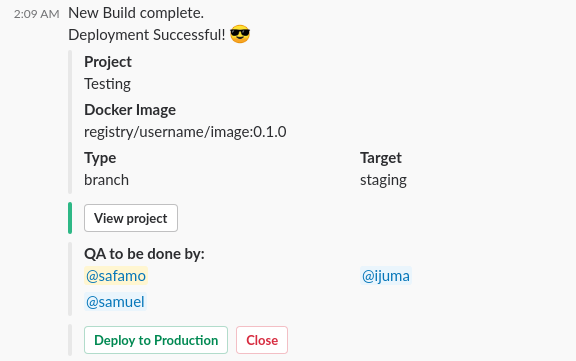 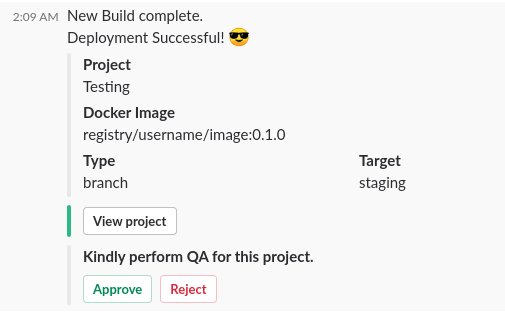 The tricky part was storing the details of the build without having to resort to using a database, to keeping it in memory where it can be lost upon restart.

In particular, the details that need to be persisted are:

To “store” these details, we can make use of the value parameter of Slack message actions. From the documentation.

Provide a string identifying this specific action. It will be sent to your Action URL along with the name and attachment’s callback_id. If providing multiple actions with the same name, value can be strategically used to differentiate intent. Your value may contain up to 2000 characters.

As you can see, when a button is clicked, we will be sent the name, value and callback_id. However, value is the only one that allows up to 2000 character. This should be enough to hold the details.

What I did was to create a payload struct like this:

And then marshal this into JSON and use as the value for all the actions. We can separate intent using the name field.

Now, we need to send the Owner message to get all the necessary details for the payload, but we also need to include the payload in the owner message actions, I ended up sending twice. The first with just the regular details, and then update it with the payload and the owner actions.

Here is the final function:

For brevity, I will not show the other functions here, but if you’re interested, be sure to check out the git repository.

When an interaction comes in, it is first sorted. We currently have only 2 types of interactions, identified by their callback_id. “QA Response” or “Deploy Decision”.

When handling the QA response, we have to do the following:

Here is the final function:

Handling the “Deploy Decision” is somewhat more complicated, so let’s split that further.

If the deployment is closed, we’ll do the following: 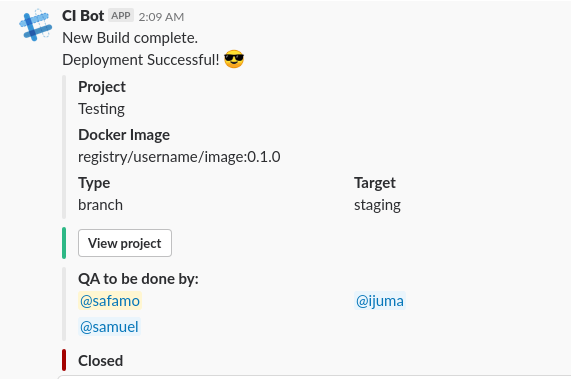 When a production deployment is triggered, we first attempt to deploy. 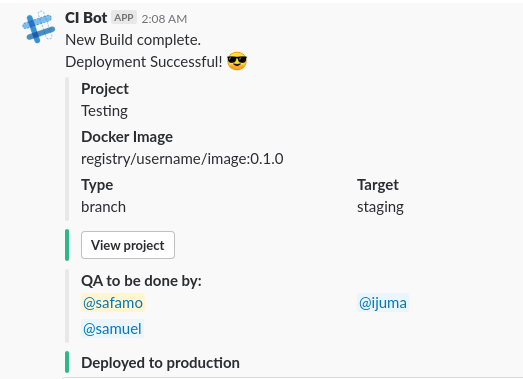 There are some functions not shown here, if you’d like to see how it was implemented, check out the git repository.

We did it! We’ve built a Proof-of-Concept slack bot that allows us to manage our deployment process within Slack. It was a nice process and I’ll definitely be looking to make it more production ready.

I’d definitely love to get thoughts and contributions on this, so please leave a comment here, or you can contact me through any of these ways:

« Creating WebGL apps with Go A Dive Into the `fmt` Package »