Today we will see how we can compute π with a technique called Monte Carlo.

Wikipedia, the ultimate source of truth in the (known) universe has this to say about Monte Carlo:

In other words, the Monte Carlo method is a numerical technique using random numbers.

With Monte Carlo integration, we can estimate the value of an integral:

With Monte Carlo simulation, we can predict an expected measurement:

In High Energy Physics (HEP) – but also in many other scientific domains – the Monte Carlo method is used to model a phenomenon, to create a simulation of a given process (and perhaps compare that simulation with measurements of the real world.) In HEP, we have very detailed simulation programs (like Geant4 that models interactions of particles with matter using all our knowledge of particle physics) and fast simulation programs (like Delphes (C++) or fads (in Go)) that very coarsely model physics. But before being able to write a HEP detector simulation, we need to know how to generate random numbers in Go.

math/rand exposes the rand.Rand type, a source of (pseudo) random numbers. With rand.Rand, one can:

If you need other distributions, have a look at Gonum’s gonum/stat/distuv.

Let’s see how we can generate random numbers with "math/rand":

OK. Does this seem flat to you? Not sure…

We’ve increased the number of random numbers to generate to get a better idea of how the random number generator behaves, and disabled the printing of the values.

We first create a 1-dimensional histogram huni with 100 bins from 0 to 1. Then we fill it with the value r and an associated weight (here, the weight is just 1.)

Finally, we just plot (or rather, save) the histogram into the file "uniform.png" with the plot(...) function: 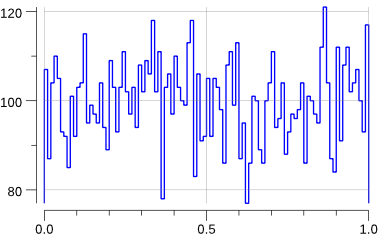 Indeed, that looks rather flat. 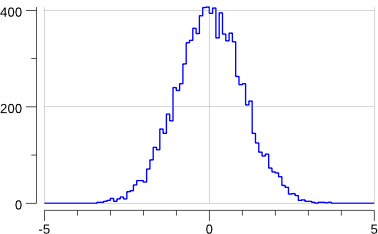 Note that this has slightly changed the previous "uniform.png" plot: we are sharing the source of random numbers between the 2 histograms. The sequence of random numbers is exactly the same than before (modulo the fact that now we generate -at least- twice the number than previously) but they are not associated to the same histograms.

The math/rand.NormFloat64 documentation kindly tells us how to achieve this:

Let’s try to generate a gaussian of mean 10 and standard deviation 2. We’ll have to change a bit the definition of our histogram: 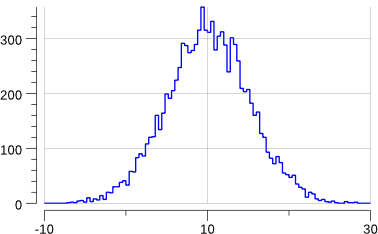 Ok, so now we know how to generate random numbers that follow some distribution. How do we evaluate π with that?

Consider a circle inscribed in a unit square:

The ratio of these two areas is thus area(circle)/area(square) = π/4.

One can then leverage the Monte Carlo technique to estimate π like so:

We just have to multiply the result by 4 to estimate π.

We can start with the following code:

We just have to fill in the blanks :).

Following the algorithm laid out above, we know we have to draw n objects randomly over the unit square and count the number of objects (or darts if you are into this kind of game) that fall inside the circle. An object can be identified by its (x,y) coordinates: we have to draw 2 random values x and y between 0 and 1 (the dimensions of the top-right quarter-square of the unit square.) This can be translated into the following code:

Then, deciding whether this (x,y) dart is inside the (quarter) circle is just a matter of applying Pythagoras’ theorem: x*x + y*y < 1.

Ok… Sadly, this is perhaps not a very quickly converging method…

Just for fun, let’s add a little GUI part to visualize where the darts land.

Our GUI will be a web server with two end points:

We will start with creating a web server:

The in and out fields are slices of (x,y) points that implement the plotter.XYer interface:

The plotter.XYer interface is used by gonum/plot to plot (x,y) points.

Values of type server will be created via the newServer function:

Next is the plot function:

We create a new hplot.Plot – a thin wrapper around the plot.Plot type from gonum/plot – with the correct labels. We plot the points inside the circle in red and the ones outside in blue.

The wplot type is just a shim to hold the resulting base64 encoded string of the PNG plot, created with renderImg:

At the other end of the srv.plots channel is the dataHandler method that pulls plots out to send them to the web client, over a WebSocket:

and, finally, the / end point and its home page:

Running the Go program and navigating to localhost:8080, you should see: 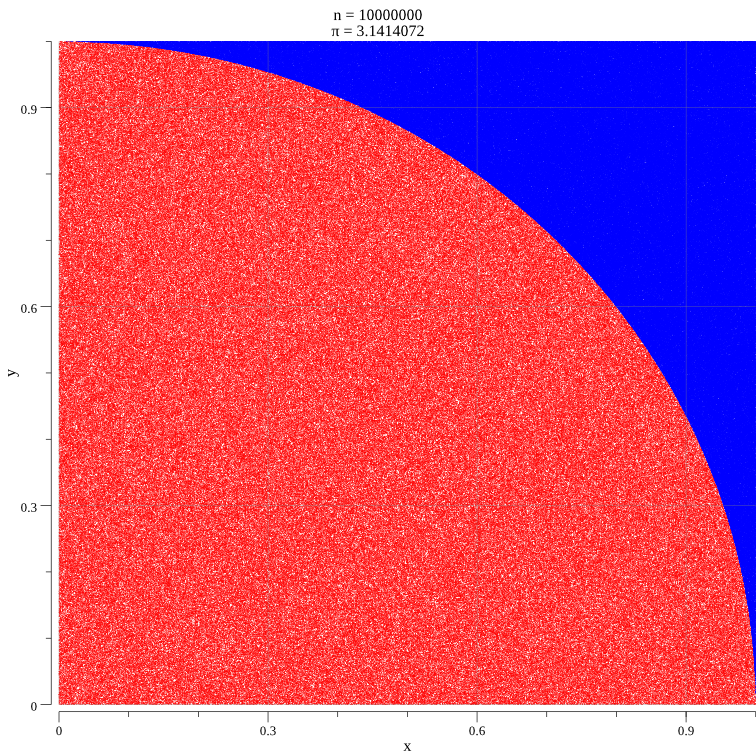 I hope this quick foray into a technique that is at the heart of many physics simulations was fun. The Monte Carlo technique isn’t always the fastest technique to perform simulations (this obviously depends on the “shape” of the function we want to model) but it is deceptively simple, and can be visually “fun” – for some definition of fun.

Note that in this little example, we had fun creating a PNG image, encoding it to JSON+base64 and sending it over a WebSocket. This was just to exercize a bunch of packages with Go. Gonum/plot has support for a few backends in addition to PNG: JPEG, TIFF, EPS, PDF, SVG, TeX.

The complete code for mc-pi-plot.go is here.