etcd is a key-value store for the most critical data of distributed systems. Use cases include applications running on Container Linux by CoreOS, which enables automatic Linux kernel updates. CoreOS uses etcd to store semaphore values to make sure only subset of cluster are rebooting at any given time. Kubernetes uses etcd to store cluster states for service discovery and cluster management, and it uses watch API to monitor critical configuration changes. Consistency is the key to ensure that services correctly schedule and operate.

Reliability and robustness is etcd’s highest priority. This post will explain how etcd is tested under various failure conditions.

A distributed system connects multiple independent computing nodes, coordinating work through message passing. This definition is deceptive in its simplicity; Leslie Lamport, inventor of Paxos, offered a more realistic definition, a distributed system is one in which the failure of a computer you didn’t even know existed can render your own computer unusable. Building a stable modern distributed system can be daunting; so many moving parts makes the system inherently complex and ultimately difficult to adequately test.

Naïve system tests assume ideal conditions: the network is stable, machine failures are absent. Production distributed systems are a world apart– machines fail, latencies wildly fluctuate, and network faults are commonplace. A distributed system must still work despite these difficulties. Modeling these failures is extra work but essential. Otherwise, very real bugs will only surface during catastrophic disasters in production.

How etcd is tested

As of December 8, 2016, etcd weighs in at 114,815 lines of Go code. This is only code that could be considered exclusive to etcd; vendored and auto-generated code doesn’t count. Over half the code base, 60,033 lines, is dedicated to tests and testing infrastructure. Since so much of etcd is dedicated to tests, there are many kinds of tests. The testing infrastructure for etcd includes unit tests, integration tests, migration tests, end-to-end tests, benchmarks, regression tests, soak tests, stress tests, and functional tests.

Unit test checks input and output of a single component within the package. For example, raft package passes a message to its message-step function and checks the response.

functional-tester verifies the correct behavior of etcd under various system and network malfunctions. It sets up an etcd cluster under high pressure loads and continuously injects failures into the cluster. Then it expects the etcd cluster to recover within a short amount of time. This has been extremely helpful to find critical bugs, before anyone else; see a list of bugs that it has found at GitHub issues for more.

Here’s the overview of functional-tester: 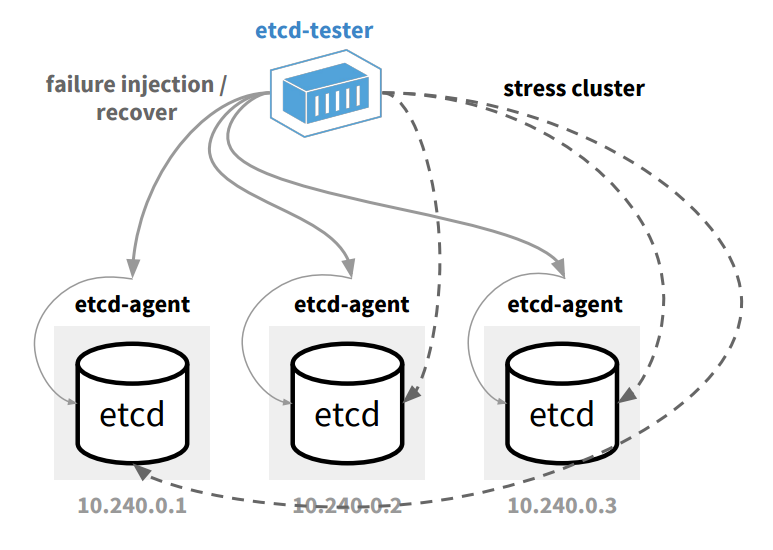 Some of the failures are:

Furthermore, it also performs crash tests, such as power loss, I/O error, partial writes, and so on. It is impractical to run these tests with real power failures. So etcd crash testing is simulated with gofail. etcd has tons of fail points in its code base, and tester triggers Go runtime panics in etcd. Some of the failures are:

And auto-generate the failpoints with:

Then output would be:

And let’s call this function:

And let’s run this process with failpoints enabled:

« Promoting the Quality and Collaboration of Your Open Source Project A little bit of Machine Learning: Playing with Google's Prediction API »